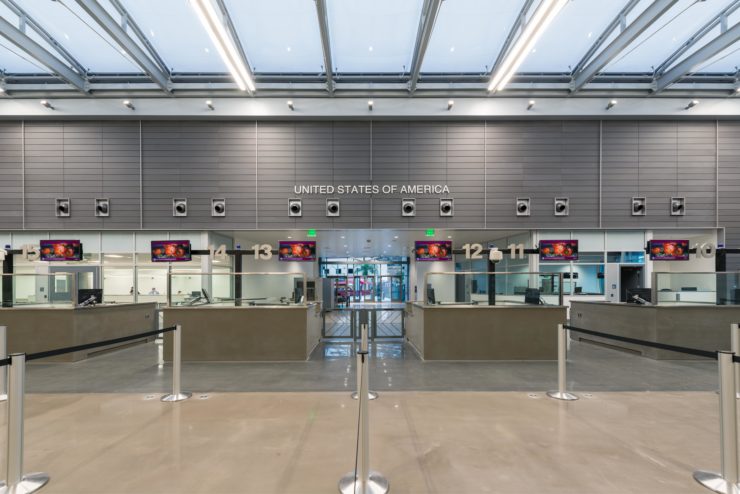 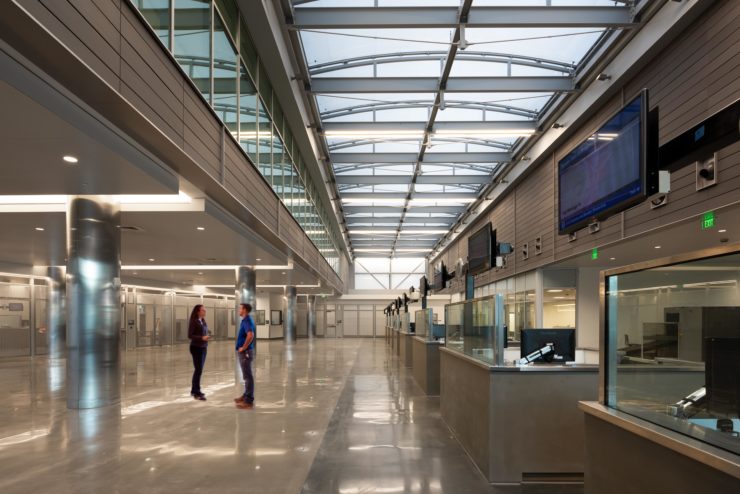 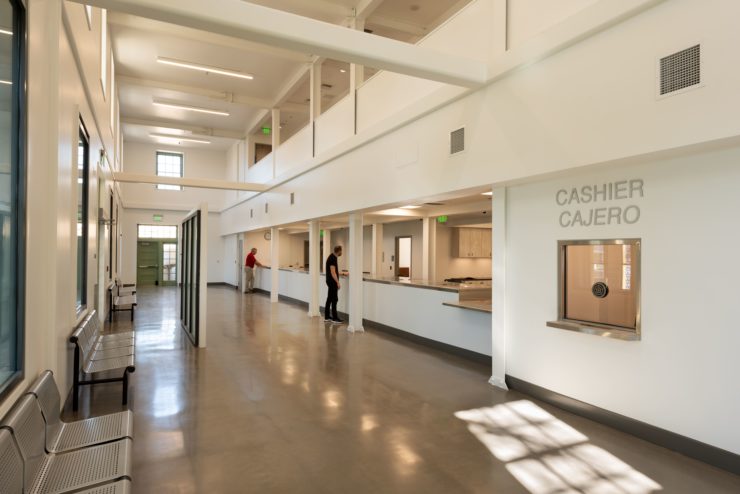 San Ysidro Land Port of Entry Phase 2 posed a variety of challenges and opportunities one can expect when working in the busiest port of entry in the US. Not only were we obligated to preserve the historical integrity of the Historical Customs House, but we also had to maintain a heightened awareness of public safety since the Port of Entry processed entries adjacent to the jobsite. The San Ysidro Port of Entry is the busiest port in the Western Hemisphere with approximately 70,000 vehicles and 20,000 pedestrians per day. With over 100,000 square feet of building space, multiple trades, historical components, background check requirements and badging, and the high-profile nature of the project, this is a great project to highlight.
The primary flooring finish of the project was 17,000 sq. ft of ARDEX PC-T architectural concrete overlay system and additional areas of ARDEX SD-M micro-topping system. As ARDEX Elite Installers, Christian Brothers Flooring & Interiors self-performed all concrete preparation, pouring of overlay and the polish/grinding of the overlay. Customization and skill also came into play when we had to custom color the overlay and the micro-topping. There was 15,000 sq. ft. of corridors and elevator lobbies in the building that were originally supposed to be polished concrete. However, due to inconsistencies in the concrete, we provided the ARDEX SD-M Micro Topping as an alternative. This gave the concrete a finish that would hide the flaws, as well as provide the customer with a durable, long-lasting, and easy-to-maintain walking surface throughout the corridors.
In addition to the ARDEX products, we skillfully installed Armstrong VCT, Johnsonite 6” Millwork base and traditional 4” base, Chapco’s Defender EZ, and other non-network products part of other flooring and tile scopes. Prepping the Armstrong VCT was a requirement we didn’t take lightly so that we could maintain the historical integrity of the specialty sub-floor. This required removal of a historic sleeper system and filling in trenches using ARDEX SD-P. After filling in the trenches, we installed a plywood subfloor to receive the new VCT.
There were two different sections of the Historical Customs House, that caused difficult working conditions. 2”x4” Wood Sleepers were chiseled out with jack hammers, then the voids were filled with SD-P in order to give us a solid substrate to pour the PC-T Overlay. In another section of the Historical Customs House building, the Historical Preservation Society would not allow the 2”x4” sleepers to be removed. Therefore, we had to screw down a 4’x8’ sheets of ¾” Tongue and Groove Plywood subfloor over the top of the existing sleeper system in order to provide a suitable surface for Armstrong VCT to be installed.
Due to working amongst a variety of trades which brought in its own foot traffic, a new challenge appeared when we had to install the ARDEX PC-T in the main traffic areas of the project. Working in tandem with painters and other overhead craftsmen the lobby posed a challenge that could only be overcome by skilled installation maneuvers as well as abiding by fluctuating schedules, so we did not negatively impact the project. The trades were not the only foot traffic we had to contend with on a daily basis. Moving ARDEX, Armstrong and Johnsonite and other materials throughout crowds created further space challenges, as well as spurred on preventative safety measures.
This job presented us with some of the toughest site conditions and greatest space challenges that make this completed project one we are proud to be associated with.