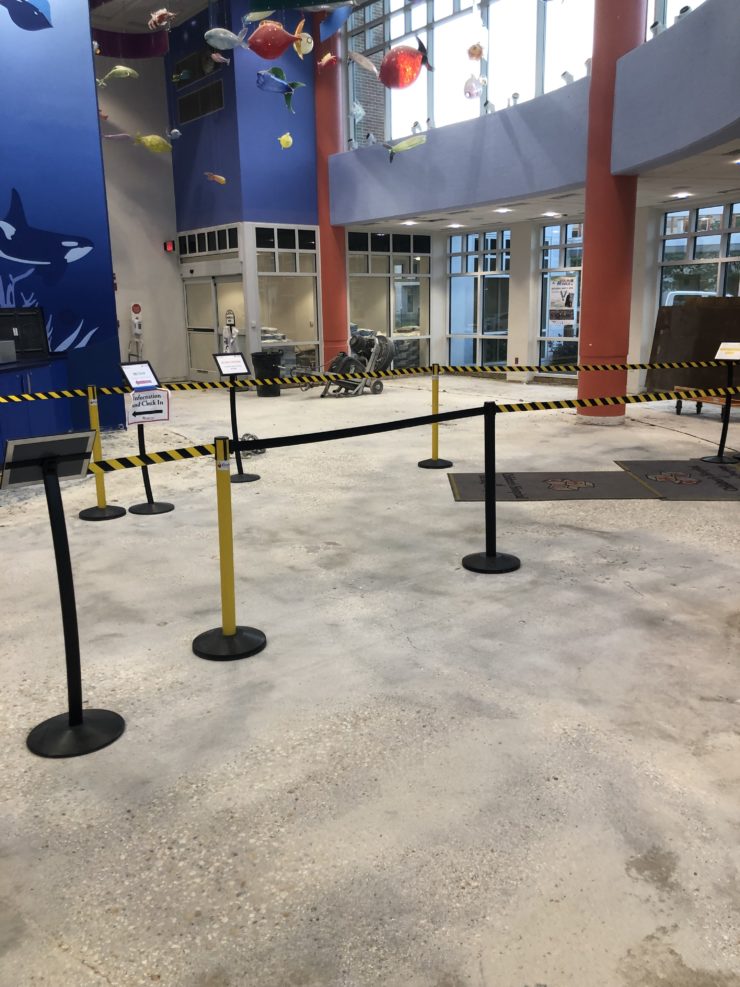 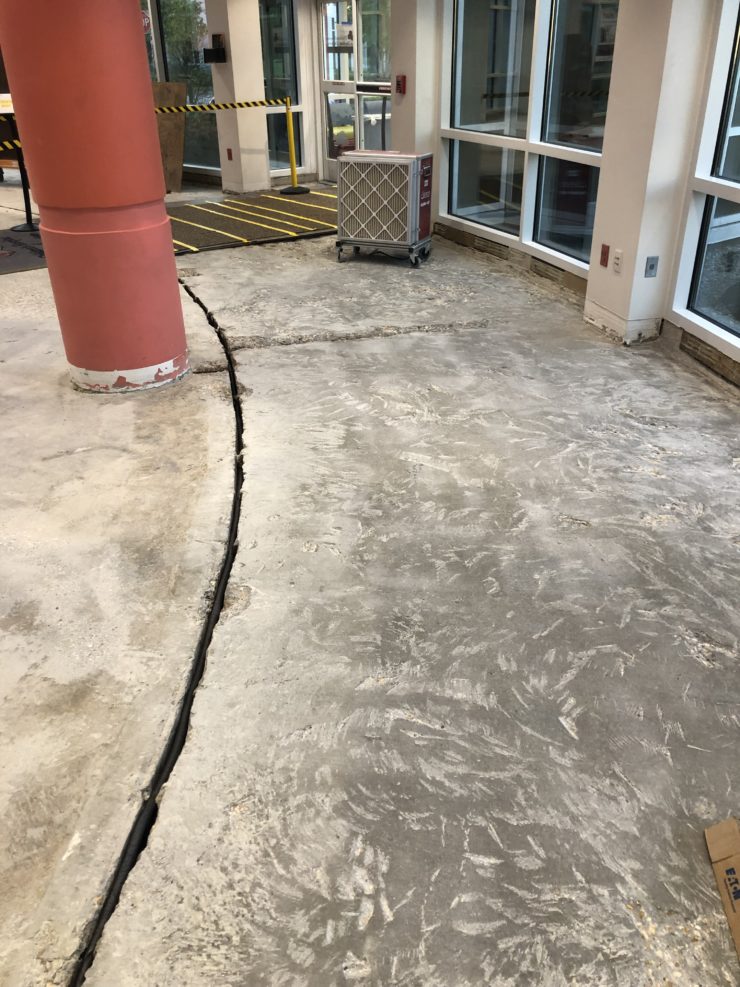 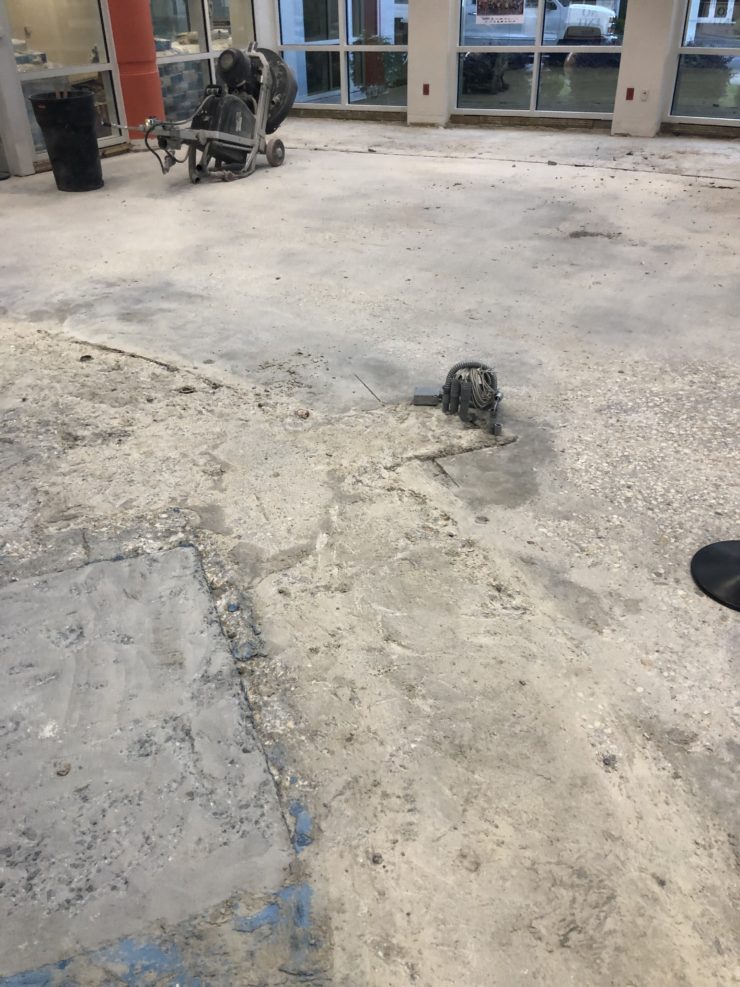 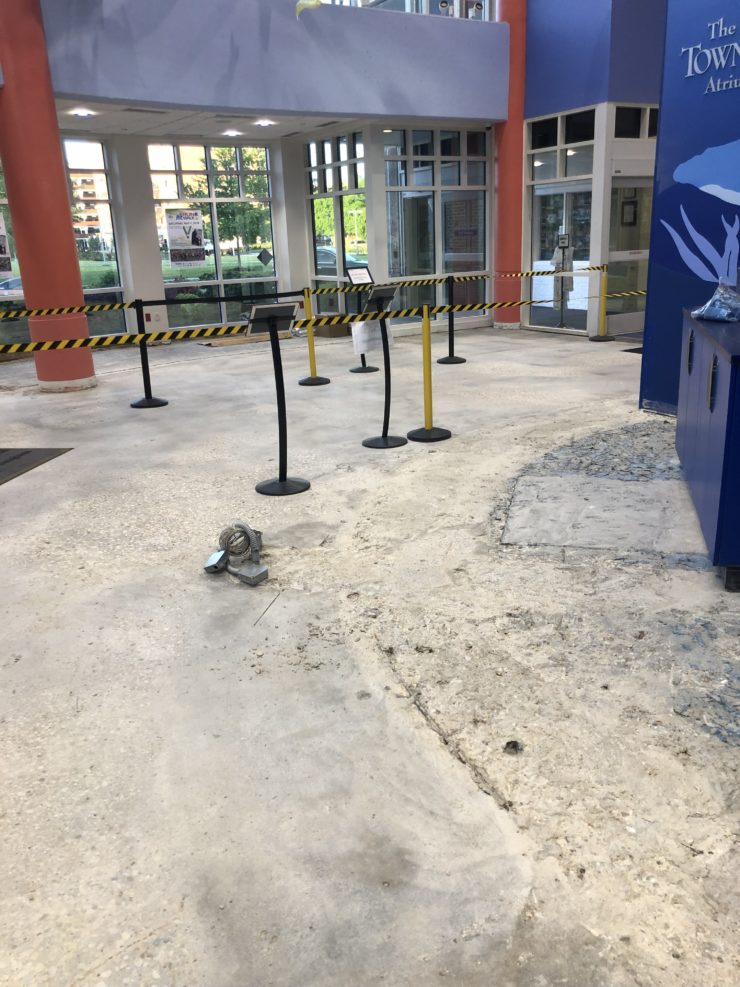 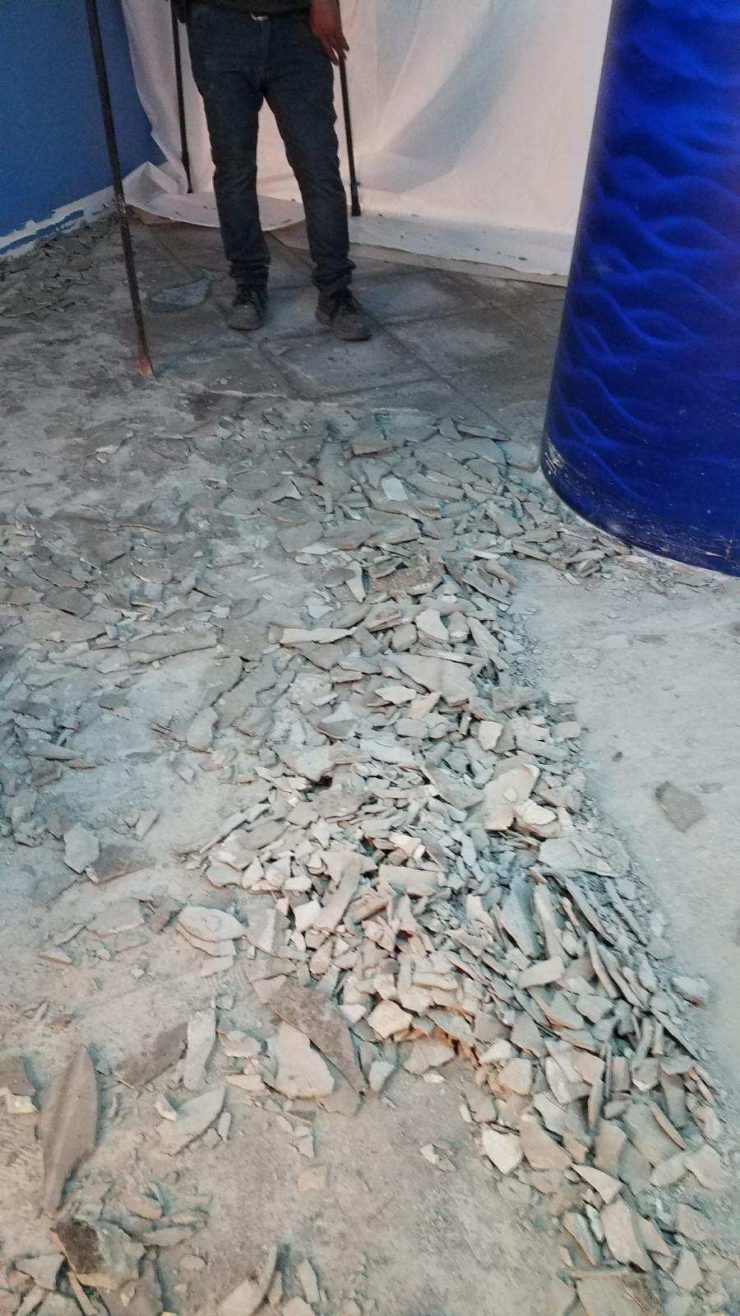 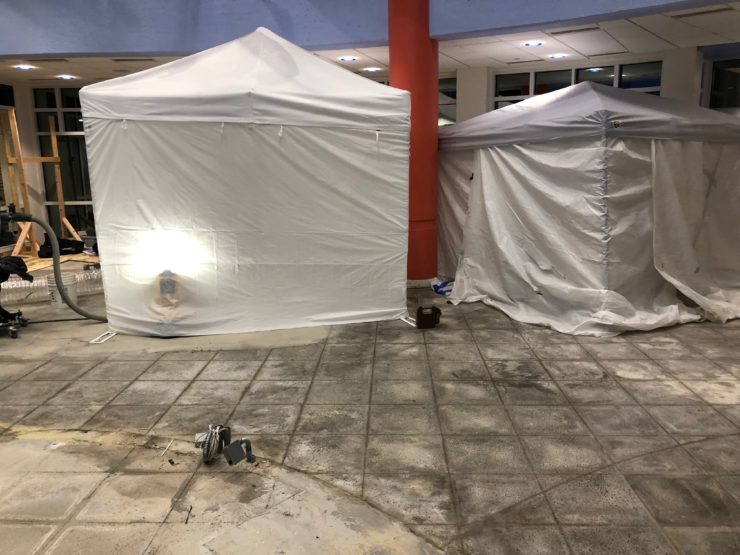 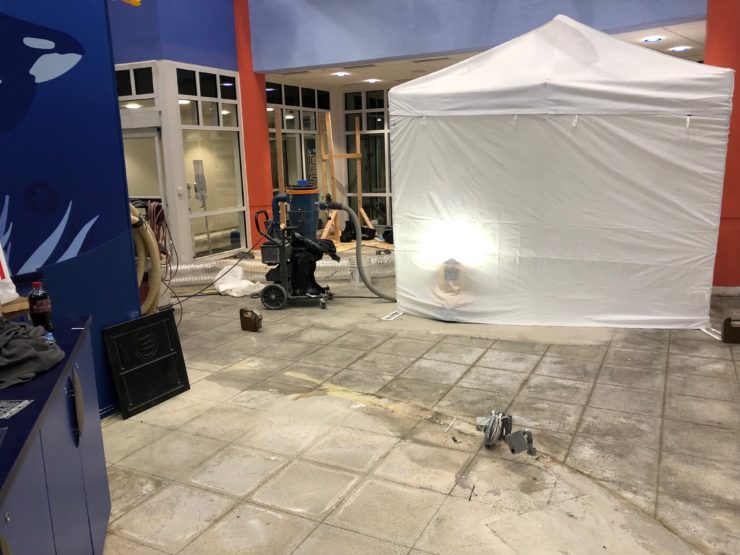 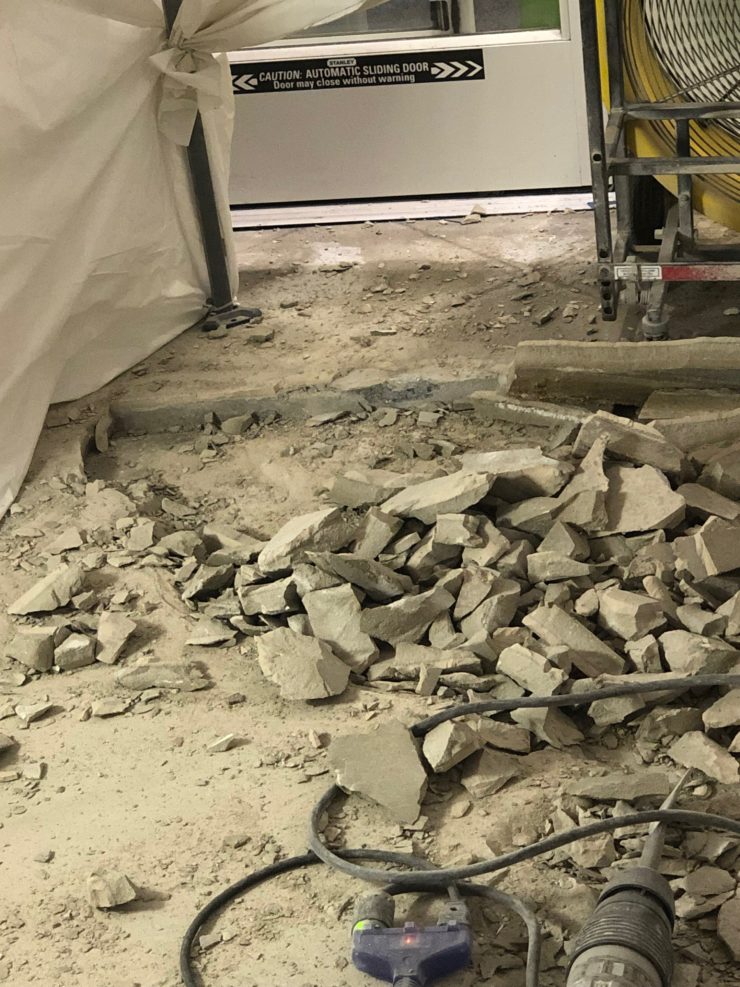 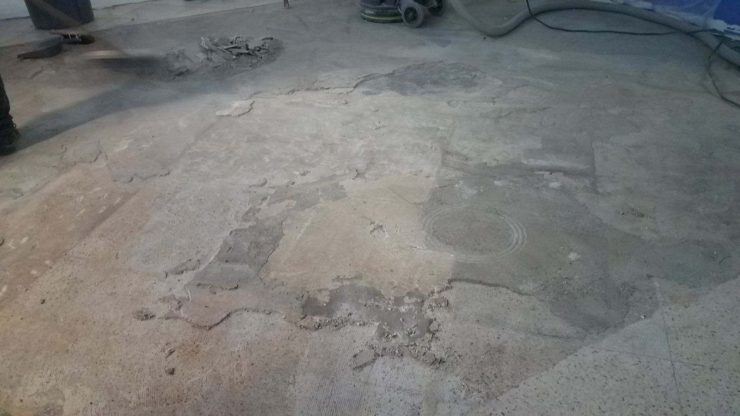 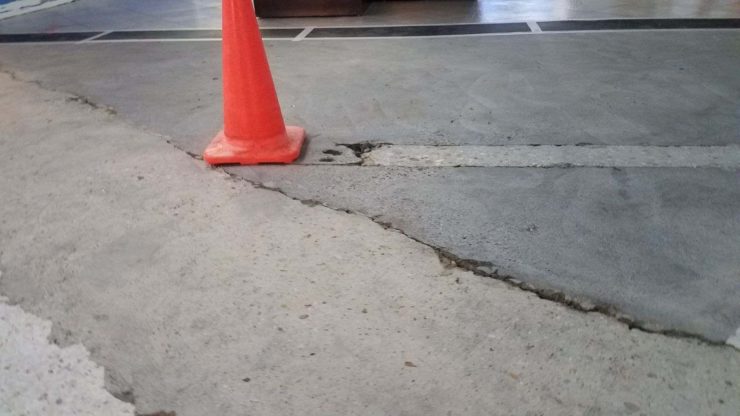 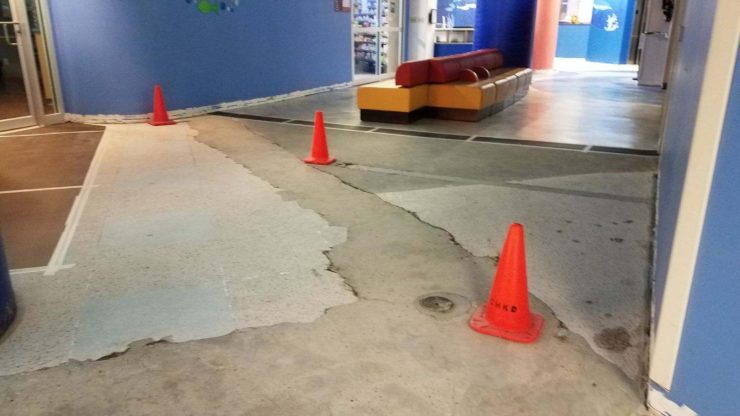 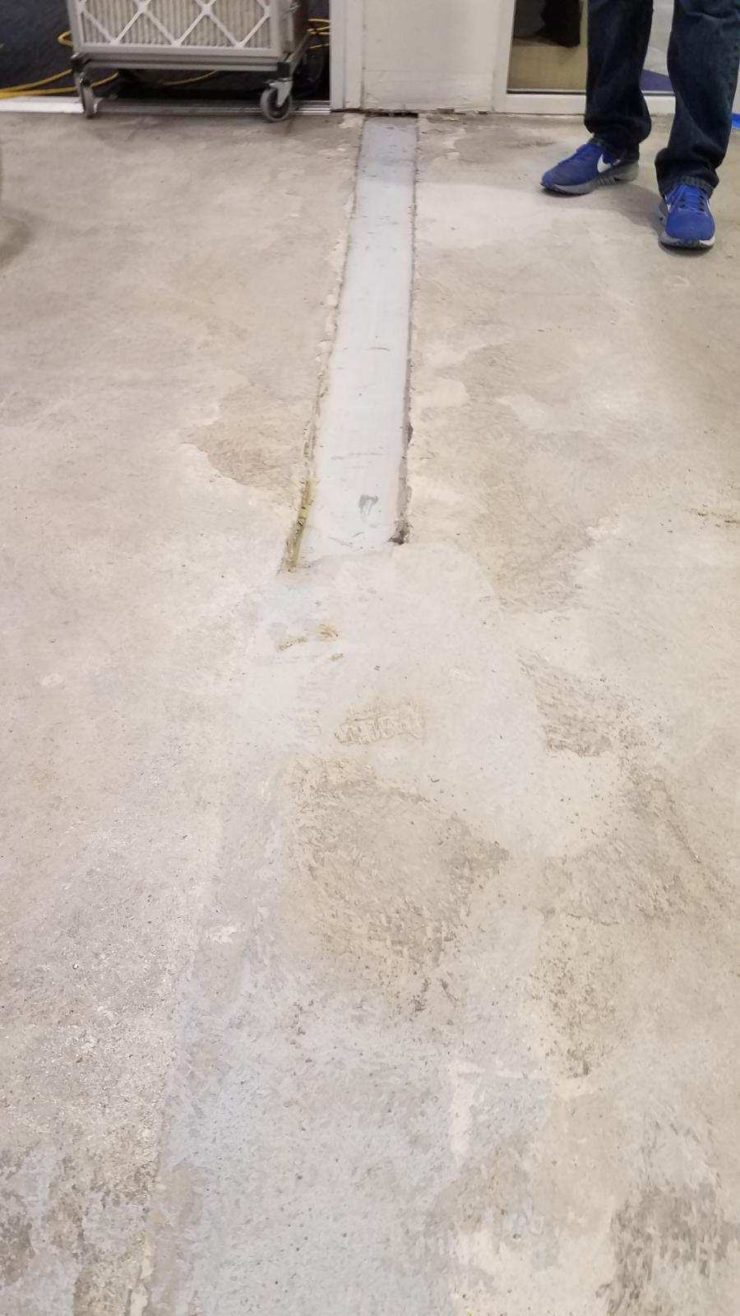 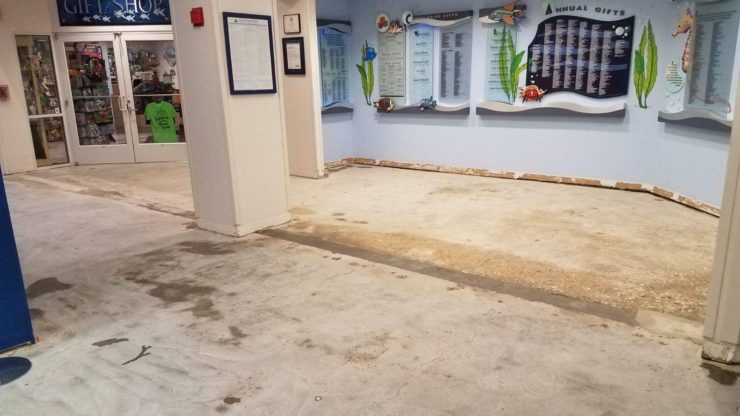 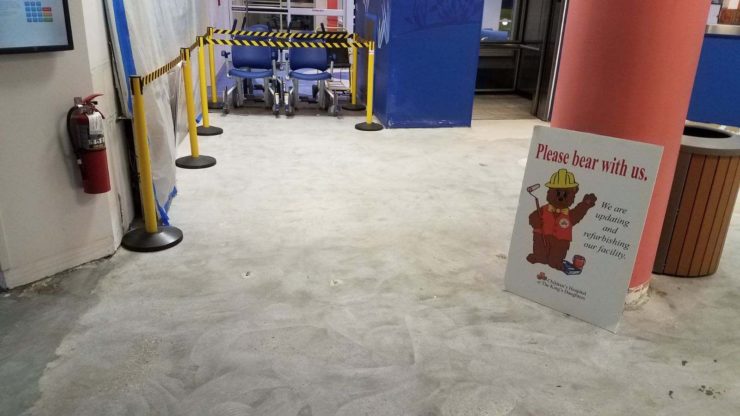 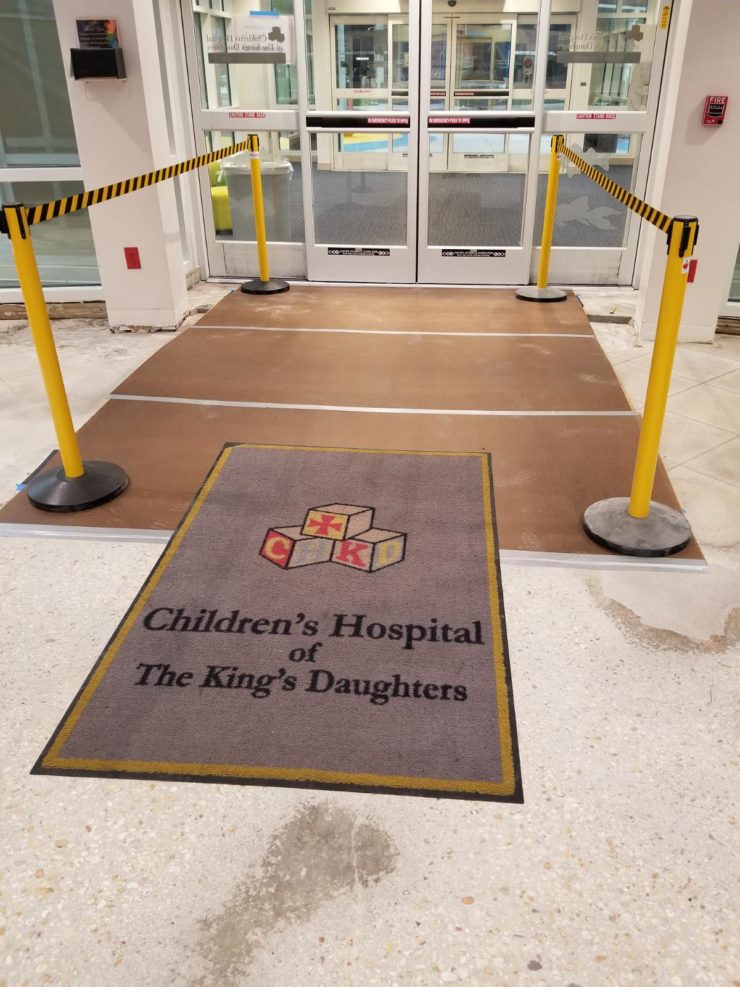 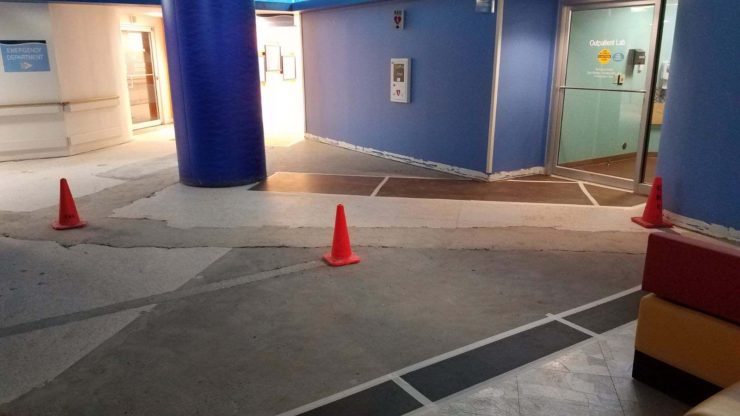 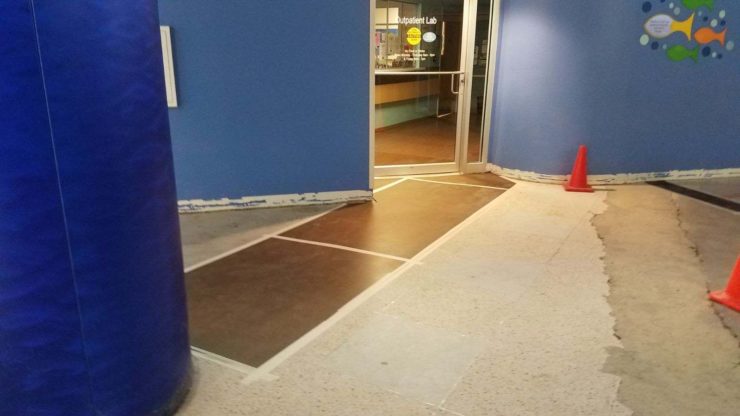 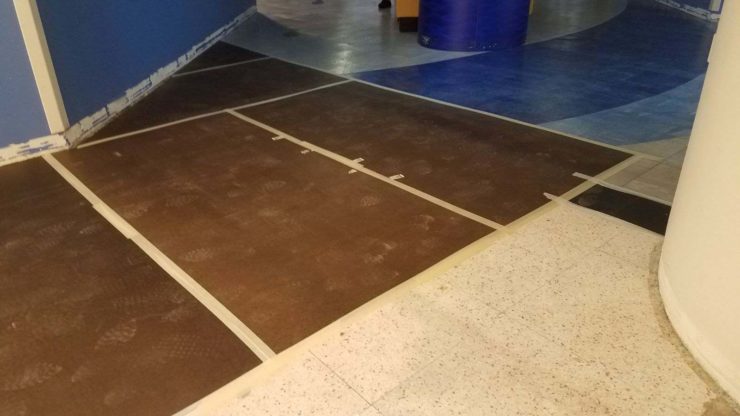 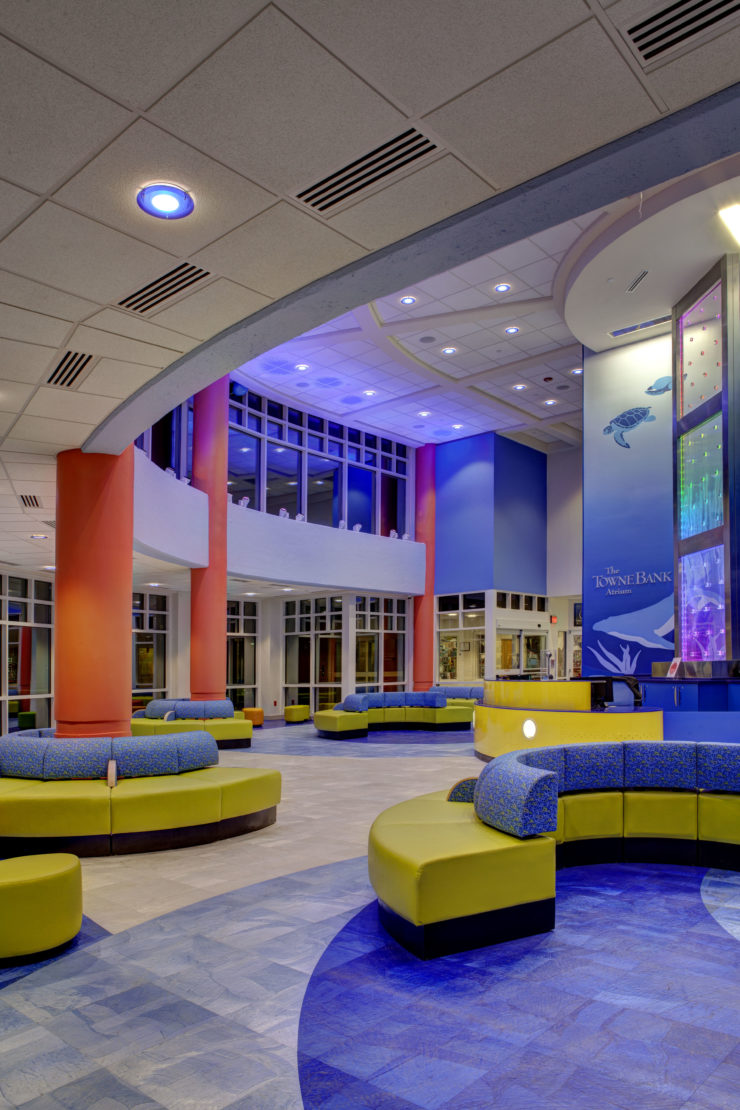 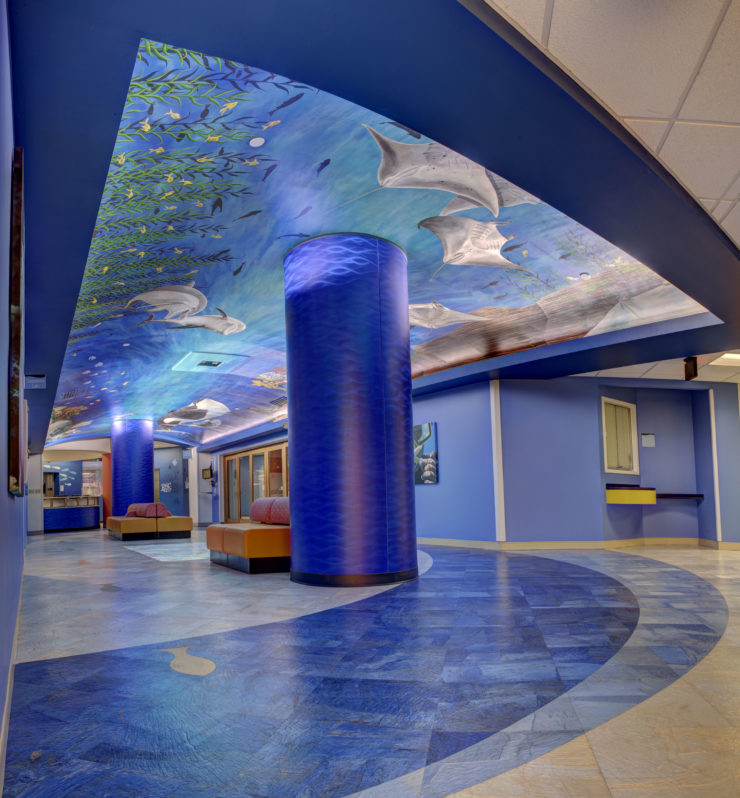 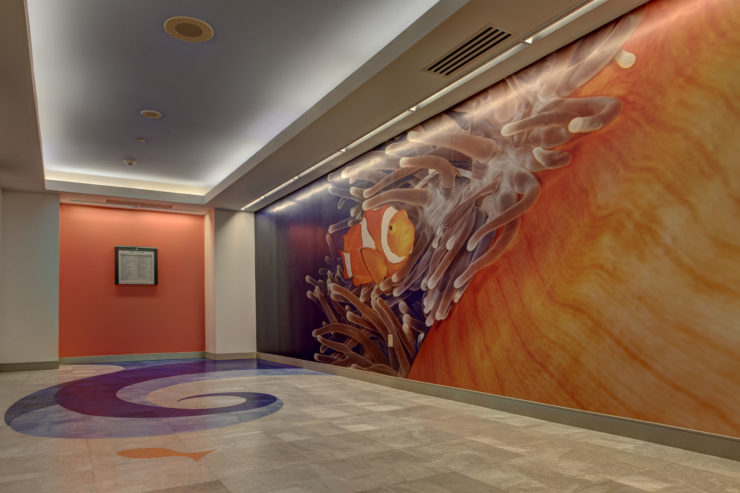 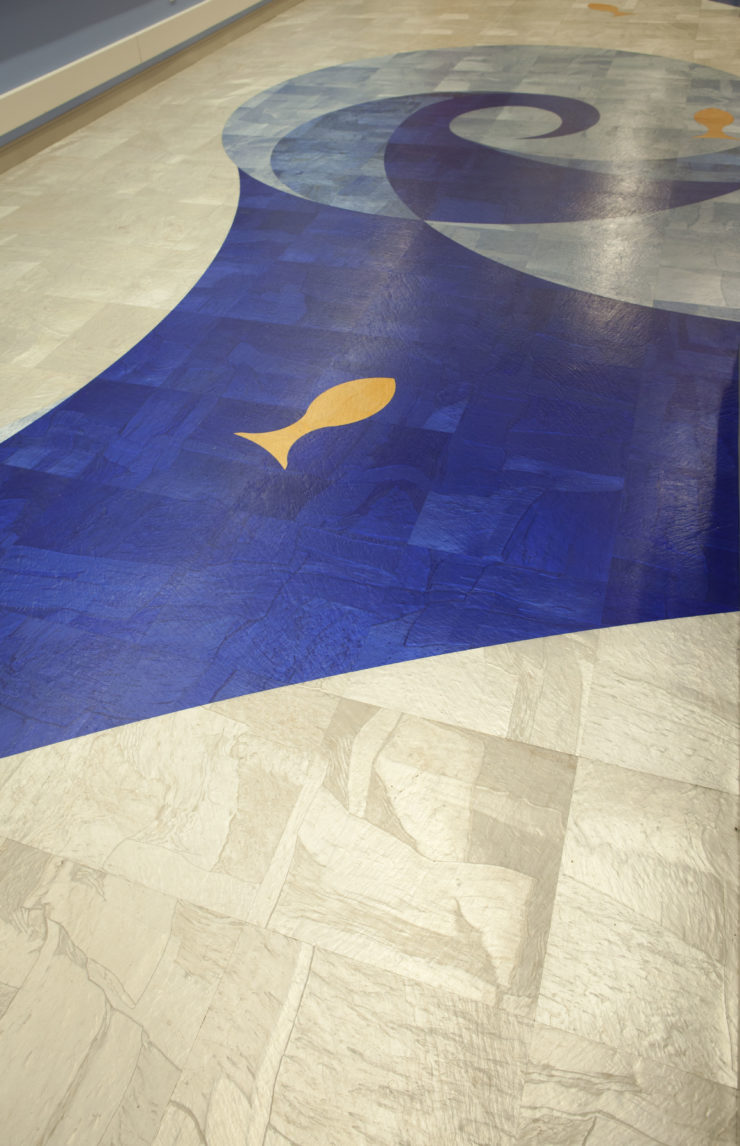 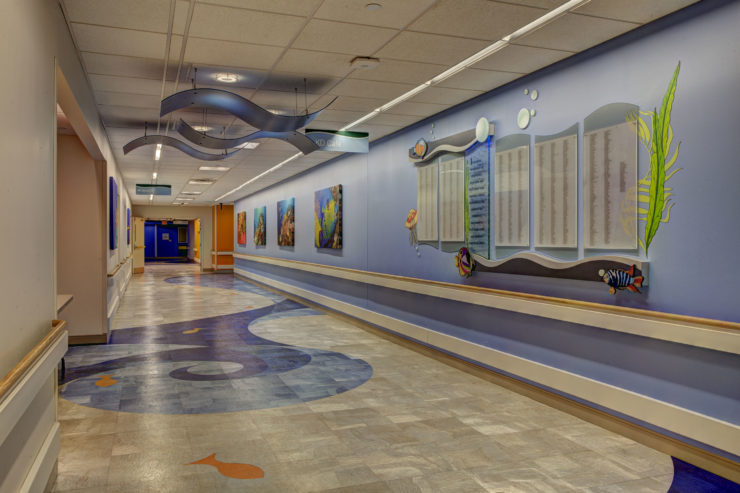 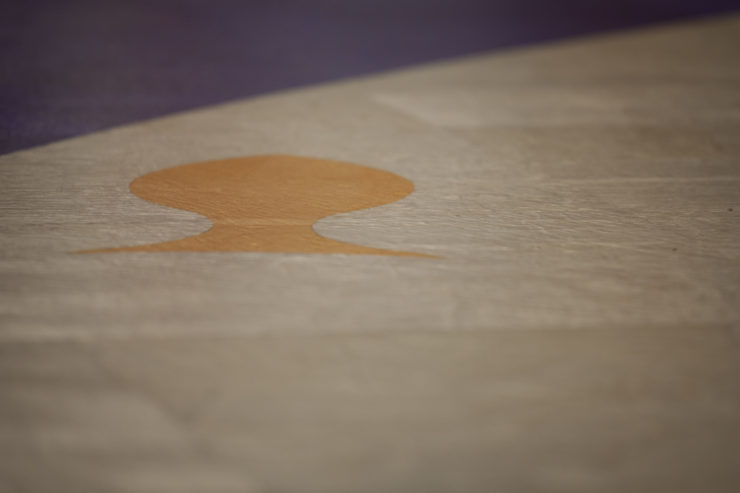 This project was at The Children’s Hospital of the King’s Daughters (CHKD) in Norfolk, VA. The project consisted of the main entrance lobby, sitting area, security check in, gift shop, pharmacy and corridor to the back of the hospital. (9,177 s/f) Products were Tarkett / Centiva Victory Series with an undersea design which was Ultrasonic cut and Johnsonite Reveal Base. Also, a 10 x 10 space that consists of an interactive projector where fish swim on the floor and as kids step ripples are created and fish swim away. Altro Dolce Essentials “white” was used here as the background.

We were contracted to do this space without any contractor support to include demolition, grinding, moisture mitigation, self-leveling (3/16" to 2.5"), same product / design with adhesives which limited foot traffic / rolling loads for 24 hours and in a space that had to remain open to the public with infection control that that had to be fitting for the youngest and most critically immune compromised patients. All work had to have professional directional / construction signage, phasing, full barriers set up, multiple air scrubbers running with carbon filters for air quality / odor, areas cleaned to infection control specifications prior to opening by 6am daily. Therefore, the mitigation / leveling cured for foot traffic and finished product protected with Masonite all with a smooth and ADA complaint change in elevation for the customer / patient.

The area was unable to be closed, so we found areas in the corridor and updated the design to allow proper start / stop points for phasing. We chose the main entrance lobby to start to accomplish the hardest work first. Two days prior to start, infection control required us to change our plans requiring a new phasing plan / logistics to start at the ER back door and work to the lobby.

Starting in the back, we moved forward implementing full measures as stated above in 500 s/f sections (+ or -) past the cafeteria and NICU admission entrances. About 1/3 up the hallway, we received word that they needed the front lobby completed prior to their telethon in 3 weeks. This was a challenge in time but also that we had to then stop our detailed pattern, move to the front and work it backwards making the Ultrasonic cut pattern and grid line back up again.

From the beginning, the main entrance / lobby was the real challenge. We knew from our previous work that around 200 bags of leveler were poured by us in this 1,947 s/f space which had to be removed by grinding / jackhammers to the original concrete to receive mitigation in an area with a 25' ceiling (30 blown glass fish hanging which could not be broken or cleaned easily) with no way to build containment and it having to be open for traffic daily. We set up (2) EZ Up Tents with walls, connected a duct from an air scrubber to the wall with another duct on the outward flow which we carried outside. All demolition of concrete was only conducted inside these tents. Also, we ran two air scrubbers in the lobby with ducts running outside along with two fans connected to ducts which we carried outside. Upon removing the 3/4" layer of leveler that we installed in 2013, we encountered something we were not expecting. In 2013, the contractor moved the front wall out 8' onto the existing sidewalk. We found where they poured 2" to nothing of leveler to feather it to the existing concrete prior to us leveling of which we had no record. We then had to remove this additional leveler (720 s/f - 2") prior to being ready to mitigate. Once completed, we had to clean the space prior to starting mitigation, leveling, and installation of the patterned product in this main entrance which remained open. Also, we had to set up lines using lasers to match the grid where we stopped 120 l/f down the hall. We completed this area in 15 days leaving 6 days to prepare for their telethon on their new floor.

Upon completion of the telethon, we then started from the edge of the lobby down the hallway to join where we had previously stopped prior. In this area was admission, Starbucks, a cashier window and the intersection which split the hallway into the different sectors of the hospital. We ran across soaked concrete along with an area around of 3/4" leveler of which both had to be removed again under these same conditions. We were able to meet the grid and pattern perfectly and completed the project.

The pharmacy and gift shop were required to be completed out of sequence, so we changed the design to incorporate full tiles blending into the hallway patterns to create the best transitions. These were the most straight forward areas but still extremely challenging to most dealers but not for expertise of Fuse Alliance companies. These areas were able to be emptied and completed closed off but with the most stringent time frames as they are profit revenue streams and patient resource areas. With all processes stated above, we worked these areas 24 hours for 3.5 days straight to meet the time.

With all these conditions and unknown / unexpected issues, we completed the job ahead of schedule with virtually no punch list item and most importantly no infection control issues. The flooring is flat, solid, sound and beautiful today with an extremely pleased customer.