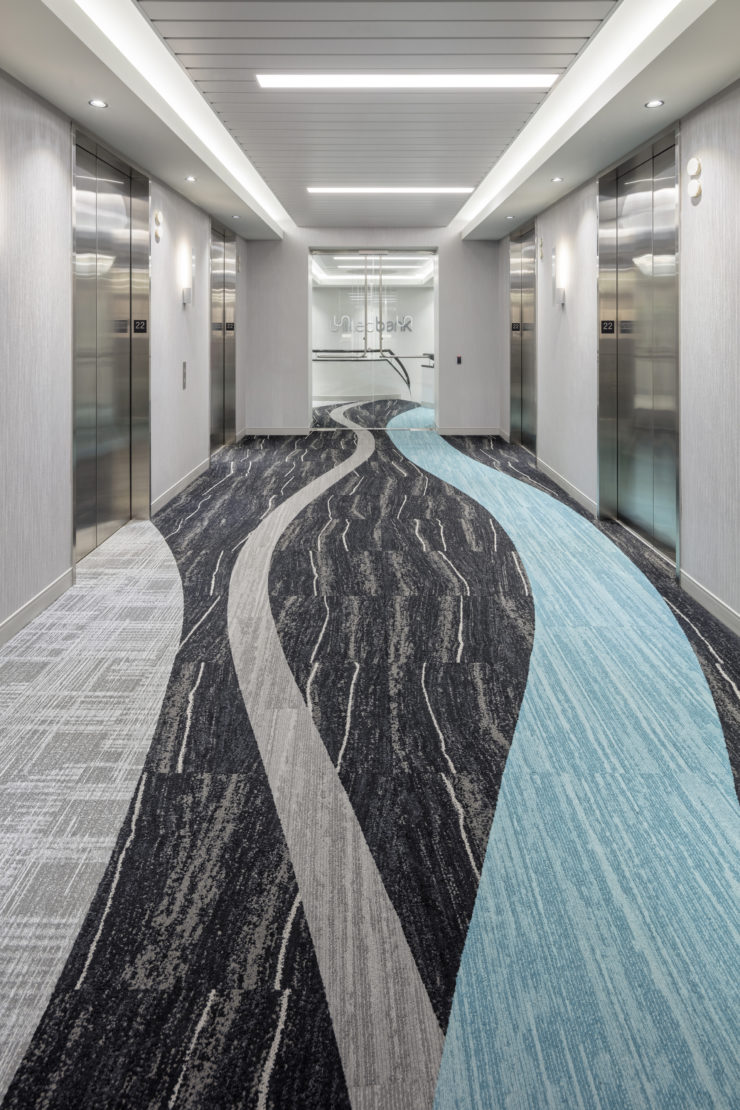 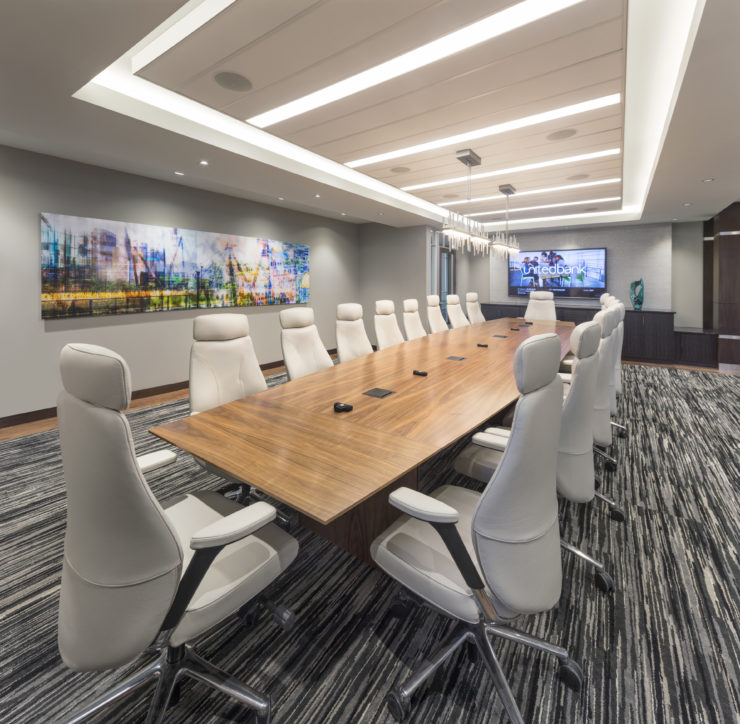 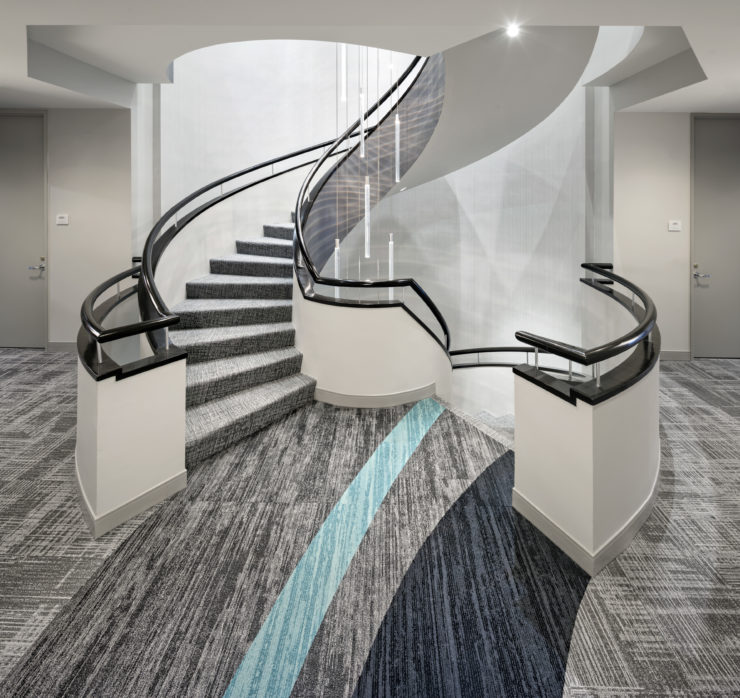 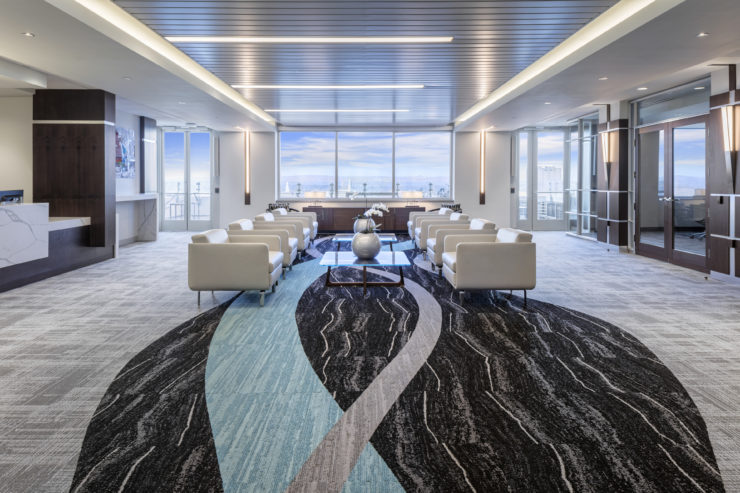 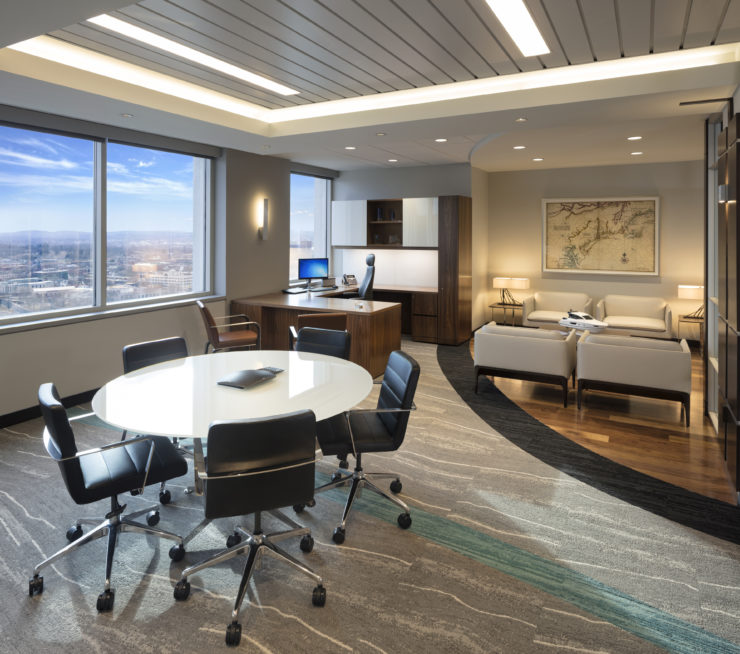 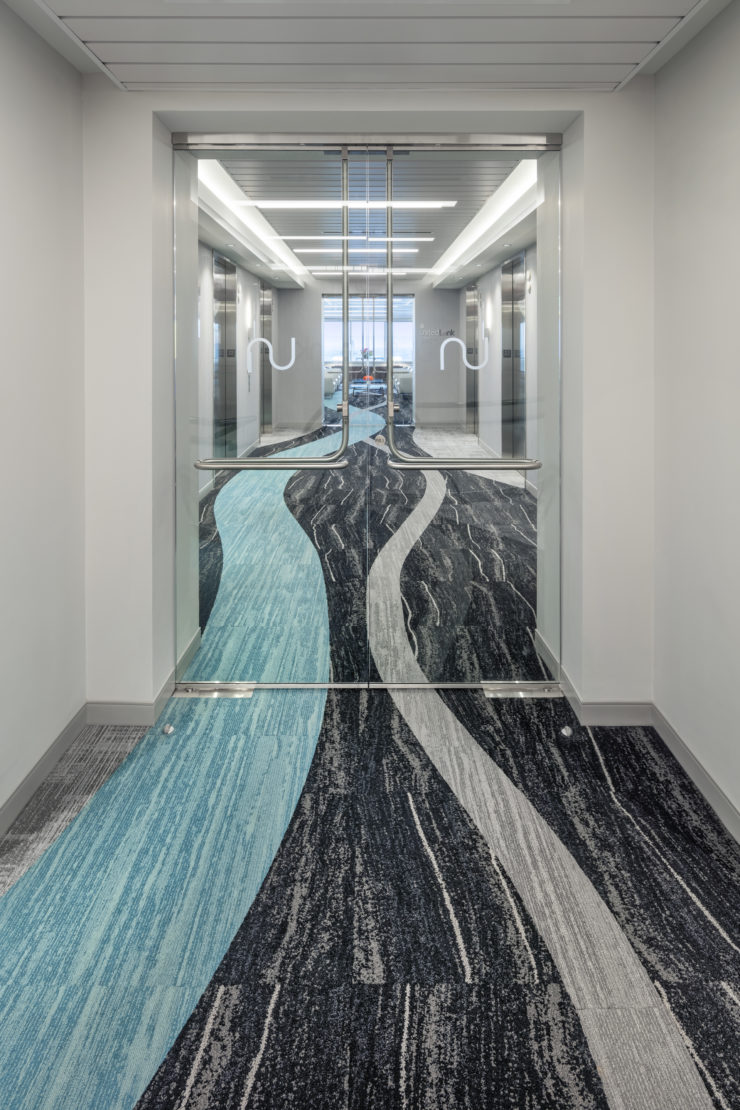 Prior to beginning the process of installing floors we had to bring in 1,300 50lb. bags of gypcrete to float the floor so that it would be level, as it was in very poor condition after the previous tenant had tried to rip up the floor tile. We were responsible for conceptually refining and creating a specifically strong, colorful and bold look to the flooring. This deliberately offset the very generic looking painted walls, which were designed with few dynamic elements. The design, pizazz and pop of this huge space mostly came through the floor covering. Carpet tile and LVT was used throughout to give a dynamic look to the floors. The client’s "river" pattern branding had to be represented everywhere across the whole space consistently. This was a challenge in itself, as the appearance of the carpet couldn’t be too repetitive, and had to remain organic and original everywhere. We also installed Armstrong Performance Plus Walnut flooring and Johnsonite 4” Millwork Reveal Base to achieve a high-end look and finish in the offices on the executive floor.

This project covered almost 75,000 square feet and included an internal spiral staircase that connected several floors independent of the elevators. The octagonal shape of part of the building itself presented significant design challenges to our team, as well as the fact that every region of every floor was unique in itself. There was a single freight elevator servicing the entire tower, and it was not a large elevator. Everything had to be transported to the floors in that single elevator; carpets, sheetrock, electricals, wiring, wall coverings, computer equipment, and furniture. These moves had to be meticulously planned, coordinated and executed in a particular order for them to be a success.

This was a large project (a total renovation of five floors for a new corporate office in downtown Hartford) that affected hundreds of people, with a non-flexible deadline. The client was moving from an existing corporate headquarters and planned to sub-lease that space, so they had to be in the new offices and operational by a specific date. The custom carpeting featured the client's branding palette as well as trademark patterns and had to be cut in place. There was an extensive planning period, and the actual work didn't begin until late-September, 2017, which gave us less than two months to execute the project. The carpeting was only one aspect of the whole, but the flooring design throughout the five stories was central to the overall aesthetic of the space. It had to be done with a lot of focus and skill in order to look correct.